Discovery of the Electron

The electron was first discovered in 1898 by Sir John Joseph Thomson. Almost 112 years ago J.J. Thomson was at Cavendish Laboratory at Cambridge University. Thomson was investigating ‘Cathode Rays’ which had been a puzzle for a long time. Through his experiments Thomson put forward a then controversial theory in which the ‘Cathode Rays’ were made up of streams of particles much smaller than atoms, Thomson called these particles ‘corpuscles‘. Thomson mistakenly believed that these ‘corpuscles’ made up the entire atom. This idea was controversial as most people at this time thought that the atom was the smallest particle in matter and was not divisible.

Thomson’s theory was not explicitly supported by his experiments. It took more experimental work by Thomson and others to conclusively prove the theory. The atom is now known to contain other particles as well. Yet Thomson’s bold suggestion that ‘Cathode Rays’ were material constituents of atoms turned out to be correct. The rays are made up of electrons: very small, negatively charged particles.

The German physicist Heinrich Hertz passed the rays through an electric field created by metal plates inside a cathode ray tube, the rays were not deflected in the way that would be expected of electrically charged particles. Hertz and his student Philipp Lenard also placed a thin metal foil in the path of the rays and saw that the glass still glowed, as though the rays slipped through the foil. Didn’t that prove that cathode rays were some kind of waves?  In 1897, drawing on work by his colleagues, J.J. Thomson set out to prove his theory by performing three experiments.

In a variation of an 1895 experiment by Jean Perrin, Thomson built a cathode ray tube ending in a pair of metal cylinders with a slit in them. These cylinders were in turn connected to an electrometer, a device for catching and measuring electrical charge. 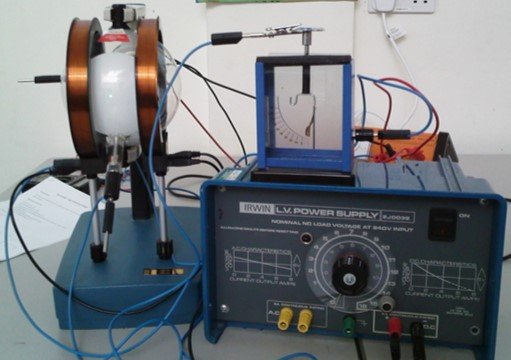 Perrin had found that cathode rays deposited an electric charge. Thomson wanted to see if, by bending the rays with a magnet, he could separate the charge from the rays.

He found that when the rays entered the slit in the cylinders, the electrometer measured a large amount of negative charge.

The electrometer did not register much electric charge if the rays were bent so they would not enter the slit. As Thomson saw it, the negative charge and the cathode rays must somehow be joined together.

Here are two quick videos, there are clearly a lot on the internet which show how electrons can be accelerated using a high potential difference.

This first practical which has full details on the IOP site can be done very simply. You need an EHT to accelerate the electrons, helmholtz coils to create an area of magnetic field across the screen and a gold leaf electroscope.

The results speak for themselves…

This experiment often called the “fine beam tube” is one . As all attempts had failed when physicists tried to bend cathode rays with an electric field. But, Thomson thought of a new approach. A charged particle will normally curve as it moves through an electric field, but not if it is surrounded by a conductor (a sheath of copper, for example). Thomson suspected that traces of gas remaining in the tube were being turned into an electrical conductor by the cathode rays themselves. To test this idea, he took great pains to extract nearly all of the gas from a tube, and found that now the cathode rays did bend in an electric field after all.

J.J. Thomson concluded from these two experiments, “I can see no escape from the conclusion that cathode ray are charges of negative electricity carried by particles of matter.” But, he continued, “What are these particles? Are they atoms, or molecules, matter in a still finer state of subdivision?”

Thomson’s third experiment sought to determine the basic properties of the particles. Although he couldn’t measure directly the mass or electric charge of such a particle, he could measure how much the rays were bent by a magnetic field, and how much energy they carried.

From this data he could calculate the ratio of the electric charge of a particle to its mass (e/m). He collected data using a variety of tubes and using different gases, this final method also very cool Physics, involving circular motion…

Permanent link to this article: https://animatedscience.co.uk/electron-diffraction-tubes