Apples – A lot is talked about in this respect. I think in essence you have to go with what you are growing and what is free. If you have to start buying apples the whole process becomes expensive! However, try and balance of sweet and cooking or tart apples. The balance of sugar and acid are required to give strength and character to a cider. Also to stop it spoiling, you cannot just use a cheap supermarket budget juice! 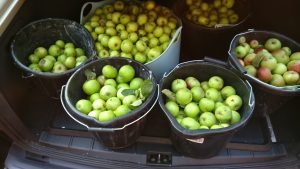 Scratter – fruit pulper, these are a must, and you are looking to try and pay around no more than £50 for a standard one. They are really a two person job, with one holding the arms on one side as you turn, unless you mount on a very sturdy frame, which unless you  make a lot of cider and no friends is not worth it. Mine is from VidxXL and is 7L but they are also sold in other places too. 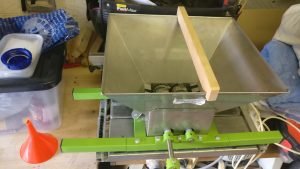 Cider Press – these do vary a lot and you can spend a lot of time making one, or sourcing a used one of high quality. I just bought a cheap one from VidaXL 18L for £70 which is good enough. If you can buy a bigger one it will work well if you have massive amounts of fruit. However, I did about 5 pressings for a boot full of apples so no issues really. They come with hardwood battens but take care, they should NOT cost £300 as some online retailers  have them at, they are ripping you off! Also avoid buying anything less than 18L. 18L works out for cut up apple as about a 5 gallon tub, which you have just crushed into, this is just right for a batch. 12L or 6L seem pretty pointless. I also think that with wine grapes they will be much easier as they are so much softer, but I have yet to try this out. 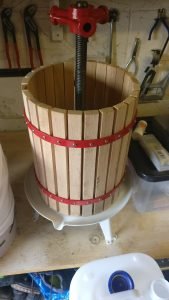 Fermenting Tubs – Be prepared to have lots of these. I just 25l old de-ionised water (food grade) plastic tubs for juices as they have great lids and take up less room. But a flat bottom vessel like this is a must. In fact you need at least two identical ones with taps (you can cut them yourself) to decant into. 25 litres is a good working volume. Also you will need old bottles and a pressure vessel to make a carbonated drink, so have one of these as well. I also like a smaller neck vessel which is easier when you are onto longer term storage and racking with a screw top lid and cut out for an air lock. 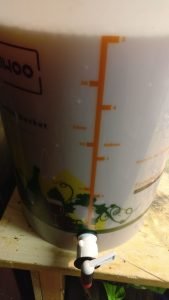 Refractometer – this is a must for anyone making any alcohol from fruit juices. It is really good as it tells you how much sugar is in your initial fluid and then later how much so you know when to bottle or keg safely. Without this you are guessing. I suggest you buy one and learn to use it before the season starts. Calibrate with pure distilled water, and then just use. Very fast and accurate. If the juice has not got enough sugar, it will not develop enough alcohol then the cider, beer or wine will spoil. Too much and you may kill the yeast too quick and end up with a very sweet drink. These should cost about £20 from Amazon. 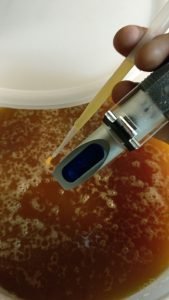 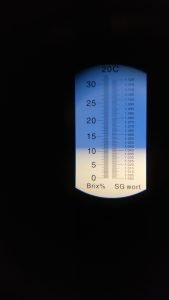 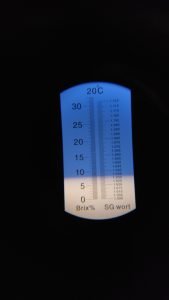 pH Meter – I bought one from Amazon again for about £15, this is essential as it gives you a pH reading initially to tell you how many Camden tablets are required to kill off any bacteria and yeasts in the initial solution. Also clearly you can also check the later pH. Acid is good as it stops the spoilage of the brew but too much is not nice to drink. 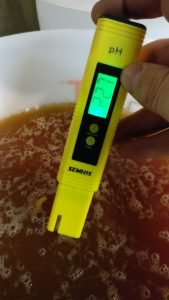 Campden tablets (sodium metabisulphite) are sometimes added to apple juice before fermentation to subdue some of the wild yeasts and bacteria present in the juice, reducing the likelihood of the cider spoiling. Dosage depends on the acidity of the juice: a low acid juice (pH of 3.7 to 3.8) will require 3 campden tablets per gallon of juice; average acid juice (pH of 3.4 to 3.6) will require 2 tablets per gallon; high acid juice (pH below 3) does not require campden tablets. To add campden tablets, crush them in a little warm juice or water and add to the juice in the fermenter. Put a mesh cloth over the cider and no lid, ensure it is tightly sealed to prevent any flies getting inside but to allow any sulphur vapours to come off the liquid. 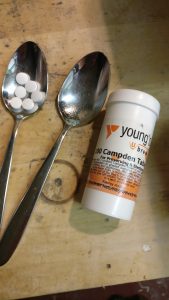 Yeast – After 24 hours add a cultured cider yeast or a cultured wine yeast, and prime the airlock. Clearly the upside to this method is to “stun” the natural yeasts and inhibit them, to enable you later to introduce your yeast of choice. There are lots available and you might use a cider yeast, this has been specifically chosen to give a “cider” flavour which can be bought cheaply for bulk sachets OR champagne yeast. Bigger Jugs sell 100g of yeast for £6.99 on Amazon which works well between 16 and 25 degrees. 10g per 25 litres. I also suggest with all yeasts that you  make a starter with dextrose and tepid water before you pitch in to get the colony off to a really good start. We are looking a natural ecosystem in the beer and it will be survival of the fittest!

Also remember that Yeast is a fungus and needs a supply of energy for its living and growth. Sugar supplies this energy (your body also gets much of its energy from sugar and other carbohydrates). Yeast can use oxygen to release the energy from sugar (like you can) in the process called “respiration”. So, the more sugar there is, the more active the yeast will be and the faster its growth (up to a certain point – even yeast cannot grow in very strong sugar – such as honey). However, if oxygen is short (like in the middle of a ball of dough), then yeast can still release energy from sugar, but in these conditions, its by-products are alcohol and carbon dioxide. It is this carbon dioxide gas which makes the bubbles in dough (and therefore in bread), causing the dough to rise. Alcohol is a poison (for yeast as well as for people) and so the yeast is not able to grow when the alcohol content gets too high. This is why wine is never more than about 12% alcohol.

Yeast Nutrient – Yeast health is one of the most important aspects of making good homebrew beer, wine or mead. After all, it is the sole reason for any alcohol being produced at all. Not only is yeast necessary for converting sugars to alcohol but it is also particularly important because it has a large influence on the flavour of the finished drink. Yeast creates many different compounds when fermenting a beer or wine that have a big effect on flavour. Wheat beer yeast for instance produce, clove, banana and bubblegum like flavours and this is desirable for the most part, if they are not healthy, however, they can produce undesirable flavours.

Unhealthy yeast can contribute undesirable flavours to your home brew. Flavours like apple flavours from acetaldehyde, harsh alcohol flavours or buttery flavours from diacetyl. These are all symptoms of poor yeast health or not enough yeast cells. This brings us to our main subject, yeast nutrition.

Yeast nutrients are added to beer or wine to ensure that the building blocks required by the yeast to form new cells and reproduce are available to them before and during fermentation.

When yeast reproduces, they require things like amino acids, nitrogen, fatty acids and vitamins to form new cells. If these are not present when you add yeast to your wort or must it can lead to problems during fermentation or even starting fermentation, to begin with. Hence, we simply add the yeast nutrient to the mix to ensure they are here, to make the fermentation and colony work well.

Dextrose – USE THIS! Dextrose brewing sugar, is a naturally occurring right-handed version of glucose. Use dextrose instead of white sugar in either your fermentation or priming your beer when bottling. Dextrose is quicker to dissolve than white sugar and 100% fermentable. It also is “pure” when labelled for beer making so should not impart any odd favours to your brew.

Sucrose – DON’T USE THIS! Sucrose is a disaccharide composed of one molecule of glucose and one of fructose. More precisely, it is dextrose plus dextrorotary fructose. It must be broken apart before the yeasts can use it. When heated in an acidic solution (such as wort) the sugar is inverted to make glucose and fructose. Yeasts will invert the sucrose if it is not already in that form before using by using invertase. It is derived from sugar beets or sugar cane that are crushed and dissolved in water. The raw syrup is boiled down to concentrate it to a point where some fraction crystallizes. The remaining heavy syrup (see “molasses”) is separated from the 95+ % pure sugar. The crystals are further processed several times to increase its purity yielding, eventually, the pure white crystals we commonly use. Some other commonly used sugars are also produced during the processing.

A complaint in the early days of modern home brewing was that using table sugar in beer-making resulted in a “cidery” beer. The symptoms were that a beer made with table sugar that was added to the boil produced a cidery flavor that faded after several weeks in the bottle. Therefore the rule of thumb became ‘avoid all table sugar’.  While this is still a good idea when using malt extract, this old wives tale is misleading. That defect most likely came from poor yeast due to a too low pitch, insufficient free-available-nitrogen, or a lack of other necessary yeast building materials in the wort. Table sugar can be used in small amounts with no harm and it is certainly cheaper to use for priming. However, my suggestion is always to stick your supply of dextrose, which is best bought in bulk of 20kg bags as the price can be steep online or in smaller bags. This will always be more consistent and can be used with wine, beer or cider regardless. If you buy a large bag it covers everything!

Permanent link to this article: https://animatedscience.co.uk/cider-making

Should we ban Whaling and the capture of all mammals for sea parks?
Yes
523 Vote
No
137 Vote