I was thinking recently about the changes we have seen to GCSE science in the past 10 years. I cannot comment before this but for the past 10 years I have taught AQA Core Science and Additional Science for Y11. Also before this the AQA double award which was split into Y10/Y11 so you had two grades.

The first thing that amazed me is when the “How Science Works” agenda came into play AQA changed the science content by mixing half of Y10 with half of Y11 then removing some content and making it the “Triple” part so I would say that pupils after the changes covered less than before unless they did triple science.

This was not the worst part. Take for example Y10 Electricity pupils would have to do a two stage calculation for working out the energy loss in a transformer in the multichoice exam. It was very difficult to get 36/36 in the exam. However, now most of the maths has come out of the exams and they are much easier for pupils (who can read) to access.  What has changed is that there are now a lot of trick questions based more in English tricks than science tricks.

It was very interesting that for the past few years I keep raising the issue within science forums and nobody wanted to admit that things had got easier. However as more changes came in for 2010 Y9 students….

The exams watchdog, Ofqual, said the new papers – designed to address concerns that science exams had become too easy – had “not gone far enough”.

Last year Ofqual said science GCSEs taken in 2007 and 2008 had contained too many multiple choice papers and had failed to challenge the brightest.

Improvements have already been made to this year’s paper, Ofqual said.

Ofqual previously ordered an overhaul of GCSE science qualifications and immediate action was taken to toughen them up for students sitting them last year and this year.

Now the watchdog says the new-look qualifications, due to be introduced in autumn 2011, have been sent back to the exam boards for more work.

A spokesman for the exam board AQA said: “We are addressing the issues that Ofqual has raised, and will be re-submitting our specifications for accreditation, whilst maintaining the innovations that teachers and subject communities have

In view of the issues that Science is having I would appeal to all students and teachers to look for a guide from history. Just thumb though the exams and the textbooks from 20 years ago for Physics, Chemistry and Biology. You will see the standards and what is expected. The gap between GCSE and AS is getting wider and you will need to make sure that if for example you wish to study AS Physics you keep to the old standards. Mathematics is constantly removed from the subject to “make is more accessible” to pupils who cannot access maths as really the subject is dying as it is so hard compared to some others. But in reality Mathematics is the language of Physics and was invented by Physicists trying to understand the world around them. If you cannot express things mathematically Physics simply becomes a talking shop and more like philosophy.

Also why when you look through these is books is so much taken out of the modern AS/A2 exams. I am now teaching about 2/3 of what I did for my A-level 15 years ago so why has it been dropped? Don’t we use op amps, rectifying circuits and transistors in our circuits any more?  Well of course we do but now they are in the 1st year of a Physics or Electronics degree? Draw your own conclusions and remember you can learn more than the exam board wants and better than the rest. Learning about science is not dictated by the exam board and we can do much more than them.

Permanent link to this article: https://animatedscience.co.uk/2011/gcse-science-a-journey

The Problem with Teaching Physics in modern times….

I am starting to worry about how we teach Physics to the pupils of today. It seems increasingly obvious that we teach more and more about things that are really unimportant to science and less about the fundamentals.

For example we spent a lot of time on the new HSW curriculum on identifying the type of a variable i.e. categorical, continuous and similar. This allows the pupils to decide which graph type to draw in an ISA exam for AQA and similar boards. However, really is that a skill that they need in their everyday lives or society needs for scientists of the future?

Now try some of these video cartoon clips https://www.animatedscience.co.uk/flv/ from KOCE (also see list on that page).

When you start to think about it, why is school Physics not split like this for all pupils into five main sections. Then just look at the topics they are such simple fundamental things which everyone should know about for their everyday lives. Also the right way to teach for pupils who go onto to Uni and further!

How many pupils really know about how a wheel works or  simple lever, possibly mans greatest inventions. However, somehow written out by the QCA from KS3 and KS4. On the select few who take A-Level Physics are supposed to learn about these basic things of life?

Even more interestingly to really see if school science has failed is ask these question to a pupil. “What do stars do”. They will all answer “emit light”. Then you refine it…. “apart from emit light” which is obviously a secondary thing. Then 99% will not know and neither will most adults either. So in fact it seems the people who write the GCSE Physics for the nation as the missed it out of all the specs.

Stars in fact create all the elements in the Universe and of course those which make up our bodies. So what do we teach about stars…. well we teach about life and death cycles but forget the major important thing.

So what am I saying? Well if you can please slip into your teaching some of the really important things which will still give us pupils who can think for themselves and be creative. Also make sure that every pupil who goes through your hands regardless of if the QCA tells you to teach it or not understands the idea of a lever!

Permanent link to this article: https://animatedscience.co.uk/2010/the-problem-with-teaching-physics-in-modern-times

Structure of a Leaf KS4/5 Biology

Have some fun label the diagram….

Permanent link to this article: https://animatedscience.co.uk/2010/structure-of-a-leaf-ks45-biology

This is part of a great Wikipedia Article, read more here….

The Teller–Ulam design is the nuclear weapon design concept used in most of the world’s nuclear weapons.  It is colloquially referred to as “the secret of the hydrogen bomb” because it employs hydrogen fusion to generate neutrons. However, in most applications the bulk of its destructive energy comes from uranium fission, not hydrogen fusion. It is named for its two chief contributors, Edward Teller and Stanisław Ulam, who developed it in 1951 for the United States. It was first used in multi-megaton-range thermonuclear weapons. As it is also the most efficient design concept for small nuclear weapons, today virtually all the nuclear weapons deployed by the five major nuclear-armed nations use the Teller–Ulam design.

Its essential features, which officially remained secret for nearly three decades, are:

The radiation implosion mechanism is a heat engine exploiting the temperature difference between the hot radiation channel, surrounding the secondary, and the relatively cool interior of the secondary. This temperature difference is briefly maintained by a massive heat barrier called the “pusher”. The pusher is also an implosion tamper, increasing and prolonging the compression of the secondary, and, if made of uranium, which it usually is, it undergoes fission by capturing the neutrons produced by fusion. In most Teller–Ulam weapons, fission of the pusher dominates the explosion and produces radioactive fission product fallout.

The first test of this principle was the “Ivy Mike” nuclear test in 1952, conducted by the United States. In the Soviet Union, the design was known as Andrei Sakharov‘s “Third Idea“, first tested in 1955. Similar devices were developed by the United Kingdom, China, and France, though no specific code names are known for their designs

Permanent link to this article: https://animatedscience.co.uk/2010/the-hydrogen-bomb-teller%e2%80%93ulam 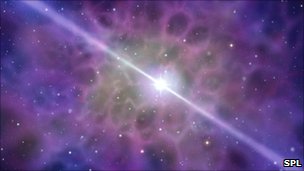 Pulsars are so-called because of the way their radio emission is detected at Eart. Astronomers have discovered what they say is the mightiest neutron star yet. The super-dense object, which lies some 3,000 light-years from Earth, is about twice as massive as our Sun. That is 20% greater than the previous record holder, the US-Dutch team behind the observation tells the journal Nature.

Like all neutron stars, the object’s matter is packed into an incredibly small space probably no bigger than the centre of a big city like London. “The typical size of a neutron star is something like 10km in radius,” said Dr Paul Demorest from the National Radio Astronomy Observatory (NRAO), Charlottesville, US. The size is easy to understand but the densitiy is much more extreme than anything we know here on Earth.

“It’s approximately the size of a city, which for an astronomical object is interesting because people can conceive of it pretty easily; and yet in that space it has the mass in this case about two times our Sun. So the size is easy to understand but the densitiy is much more extreme than anything we know here on Earth,” the study’s lead author told BBC News. 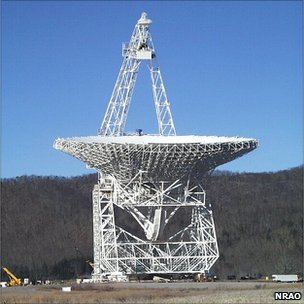 The finding is important, says Dr Demorest’s team, because it puts constraints on the type of exotic material that can form a neutron star. Such objects are thought to be the remnant cores of once giant stars that blew themselves apart at the ends of their lives. Theory holds that all atomic material not dispersed in this supernova blast collapses to form a body made up almost entirely of neutrons – the tiny particles that appear in the nuclei of many atoms. As well being fantastically compact, the cores also spin incredibly fast. This particular object, classified as PSR J1614-2230, revolves 317 times a second. It is what is termed a pulsar – so-called because it sends out lighthouse-like beams of radio waves that are seen as radio “pulses” every time they sweep over the Earth.

The observations were made using the Green Bank Telescope in West Virginia. The pulses are akin to the ticks of a clock, and the properties of stable neutron stars make for ultra-precise time-pieces. This was how the team, observing with the Green Bank Telescope in West Virginia, was able to measure the object’s mass. Because PSR J1614-2230 also circles a companion star, its pulses – as received at Earth – are disturbed by the neighbour’s gravity.

The team could use this effect to calculate the masses of both bodies. The group reports a pulsar mass 1.97 times that of our Sun – significantly greater than the previous precise record of 1.67 solar masses. The result is said to put limits on the type of dense matter that can make up the cores of these bizarre objects. Some scientists had suggested exotic particles such as hyperons, kaon condensates or free quarks could exist deep inside neutron stars. But Dr Demorest and colleagues believe their observations preclude this possibility. “It’s simply that if those particles were formed, the star would get too dense and collapse into a black hole prior to this point,” the NRAO researcher said.

Permanent link to this article: https://animatedscience.co.uk/2010/neutron-stars-from-bbc

Should we ban Whaling and the capture of all mammals for sea parks?
Yes
589 Vote
No
146 Vote