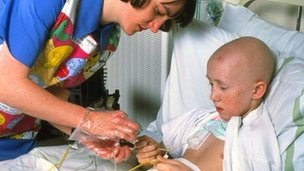 Leukaemia accounts for around a third of childhood cancers

Children living near nuclear power plants do not have an increased risk of developing leukaemia, a study says.

The British Journal of Cancer study is not the first to rule out a link – but previous studies’ methods were challenged.

Cancer Research UK said the results were “heartening” but added monitoring should continue.

Leukaemia is the twelfth most common cancer in the UK, but accounts for a third of all cancers diagnosed in children.

Concern over a link between nuclear power plants and childhood cancers was triggered in the early 1980s when a TV investigation reported a higher number of cases among children living near the Sellafield plant in Cumbria.

Since then, there have been conflicting reports from studies in the UK and the rest of Europe as to whether there is a link.

Some anti-nuclear groups have criticised the way previous studies have been carried out.

They point to a German study which suggested there could be a link.

In this latest study, carried out using the same method as the German one, experts from the Childhood Cancer Research Group in Oxford looked at data on almost 10,000 children who were diagnosed with leukaemia or similar cancers in Britain between 1962 and 2007 when aged five or under.

“The incidence of childhood leukaemia near nuclear installations in Great Britain has been a concern ever since the 1980s” Dr John Bithell,Childhood Cancer Research Group

The data was taken from the National Registry of Childhood Tumours, which has kept records on nearly all children diagnosed with cancer since 1962 and which is linked to birth records for children born in Britain.

They looked at where these children were born and where they lived when they were diagnosed.

They also compared the information with data on more than 16,000 children with different cancers.

The study found there was no apparent increased risk of developing childhood leukaemia or non-Hodgkin lymphoma among children living near nuclear power plants.

Dr John Bithell, honorary research fellow at the Childhood Cancer Research Group who led the study, said: “The incidence of childhood leukaemia near nuclear installations in Great Britain has been a concern ever since the 1980s when an excess of cancer in young people near Sellafield was reported in a television programme.

“Since then, there have been conflicting reports in the UK and Europe as to whether there is an increased incidence of childhood cancer near nuclear power plants.

“Our case-control study has considered the birth records for nearly every case of childhood leukaemia born in Britain and, reassuringly, has found no such correlation with proximity to nuclear power plants.”

Cancer Research UK said the study did support previous findings, but said its small numbers and the fact it did not look at plants which carried out other work such as fuel processing – plus the finding of an increased risk in the German study – meant more work was needed.

Hazel Nunn, head of health information, said: “It’s heartening that this study supports the findings of the Committee on Medical Aspects of Radiation in the Environment (COMARE), that being born or living near a nuclear power station doesn’t lead to more cases of leukaemia and similar cancers in children under five in the UK.

“But these results can’t rule out any possible risk, so it’s still important that we continue to monitor both radiation levels near nuclear power plants and rates of cancer among people who live close by.

Permanent link to this article: https://animatedscience.co.uk/2013/nuclear-plants-no-cancer-risk

Does chocolate give you spots?

Permanent link to this article: https://animatedscience.co.uk/2013/does-chocolate-give-you-spots

Permanent link to this article: https://animatedscience.co.uk/2013/loophole-lets-banned-meat-into-uk

Here is my new recipe for golden marjoram and sage pork sausages. Instructions are…

Permanent link to this article: https://animatedscience.co.uk/2012/golden-majoram-sage-pork-sausages

This is my first cheese that I have ever tried so I thought I would share it!

This cheese is a soft roule style cheese which is relatively simple to make. However, you will need to assemble some items first.

It is a simple process in which attention should be paid to the cleanliness to avoid bacterial contamination or your cheese (i.e. you are leaving it to grow bacteria) and also the temperatures for the enzymes as one denatured that is it!

It might be worth now dividing the cheese into separate bowls and mixing herbs, garlic, paprika, sesame seeds or crushed peppercorns to the outside of the cheese before placing into a mould and shaping.  Remember more is often less!

The cheese will take a better flavour if allowed to ripen in the fridge on a small piece of cheese matting overnight and then wrapping in cling film. In this case they have been put into a shaping mould. 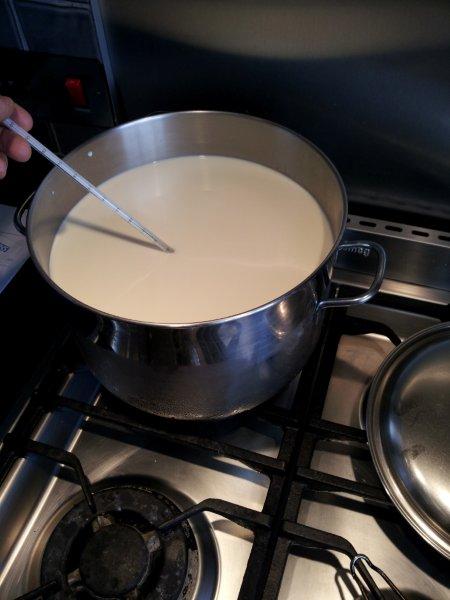 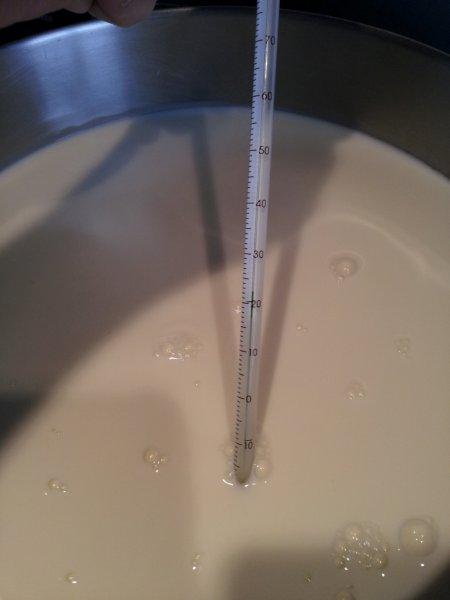 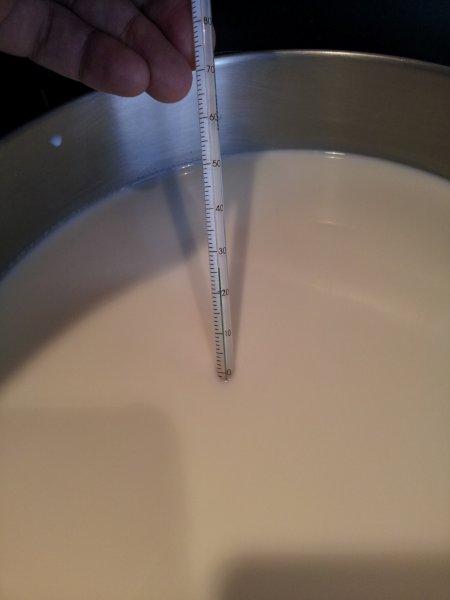 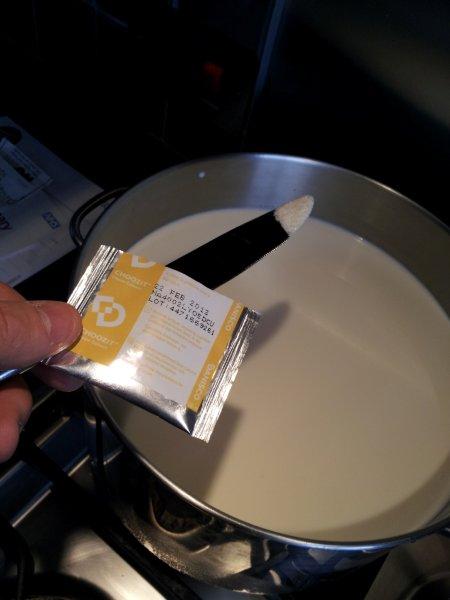 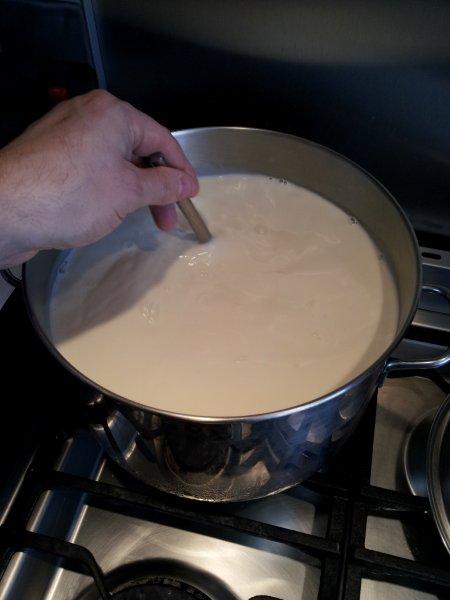 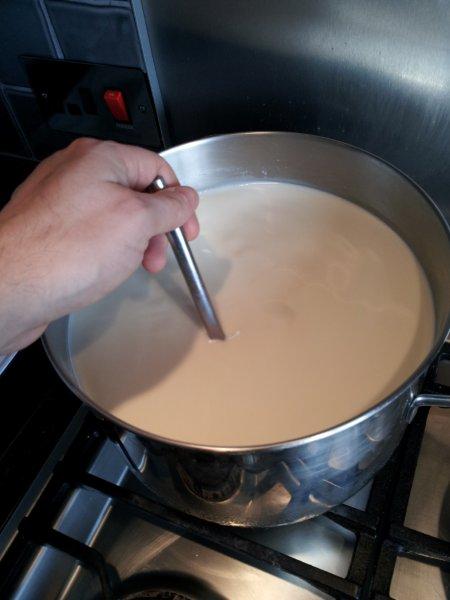 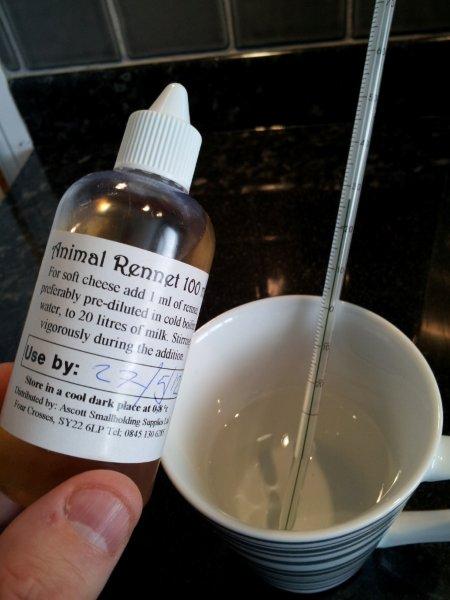 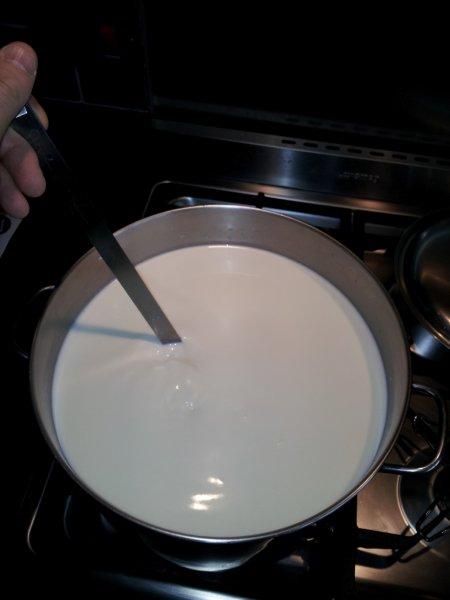 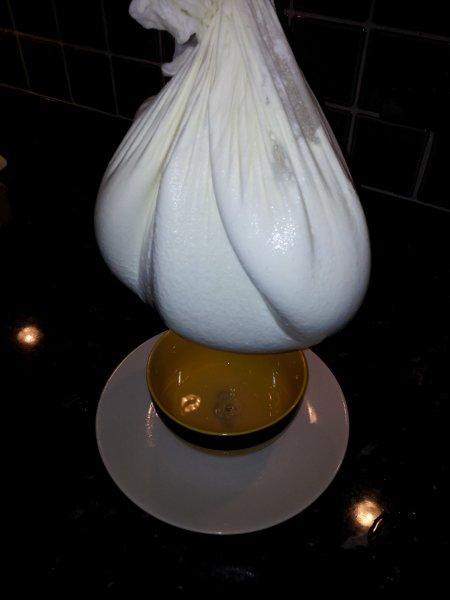 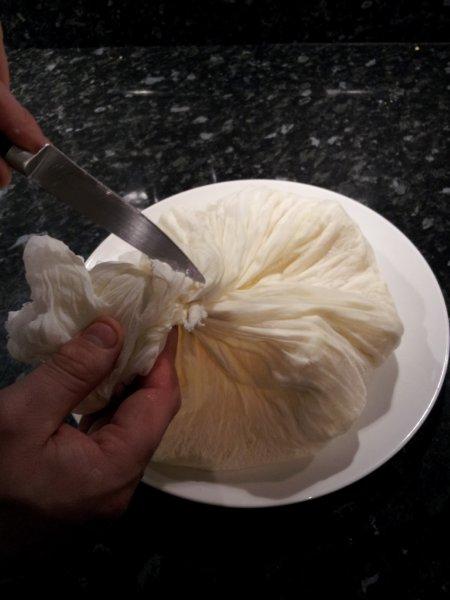 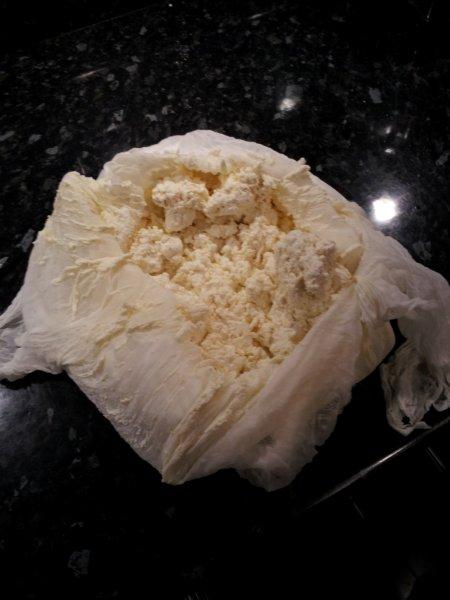 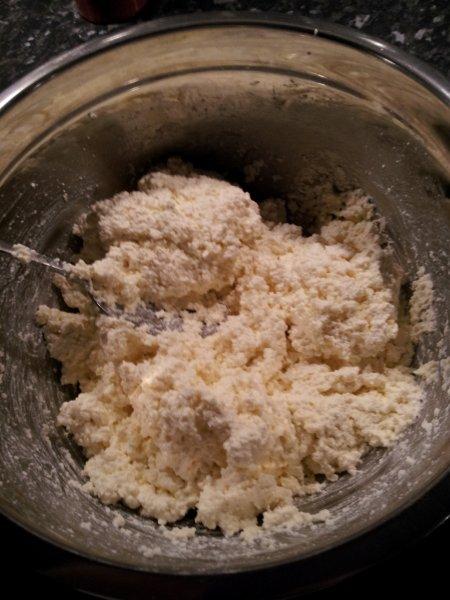 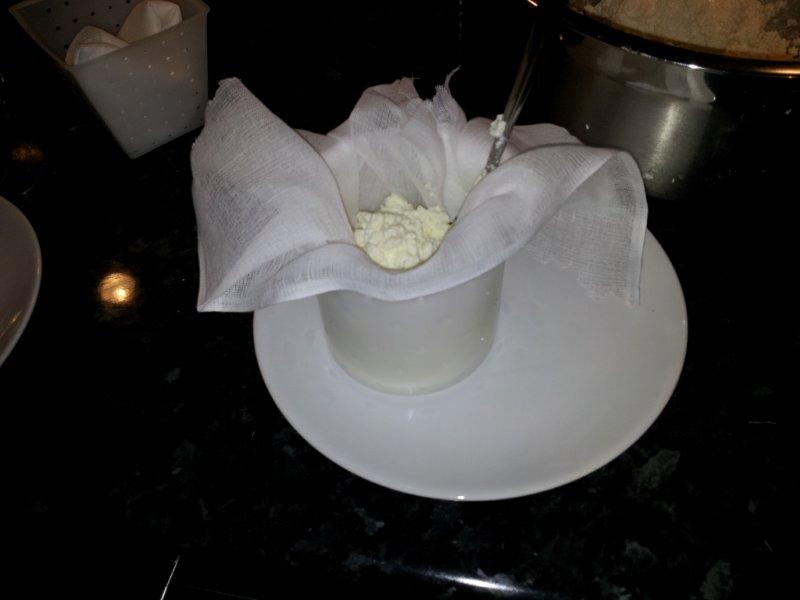 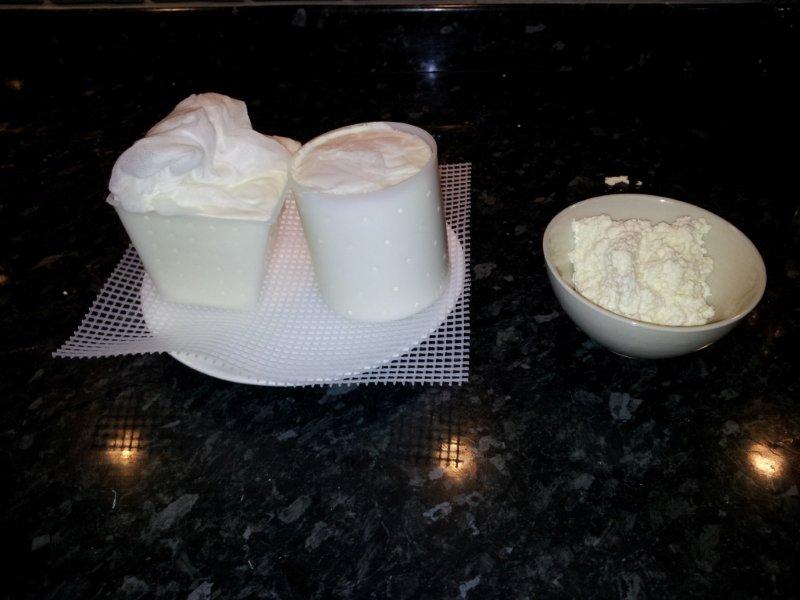 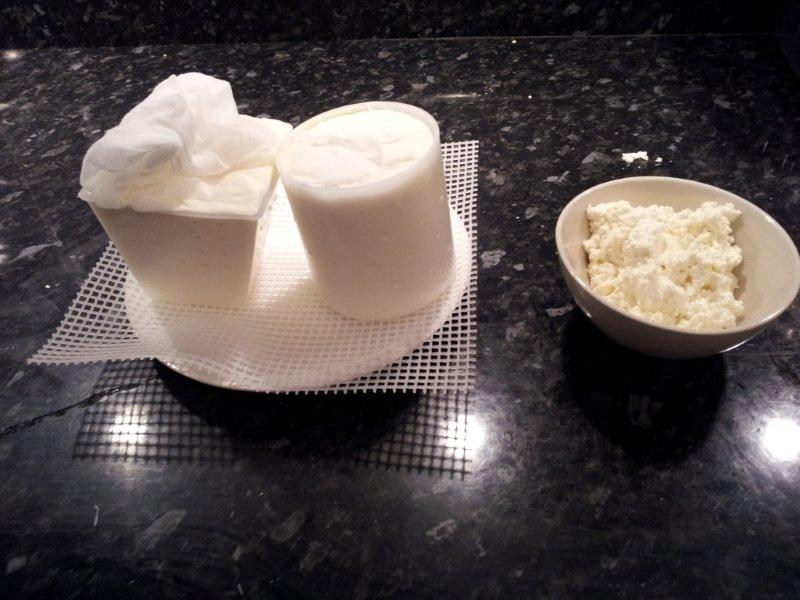 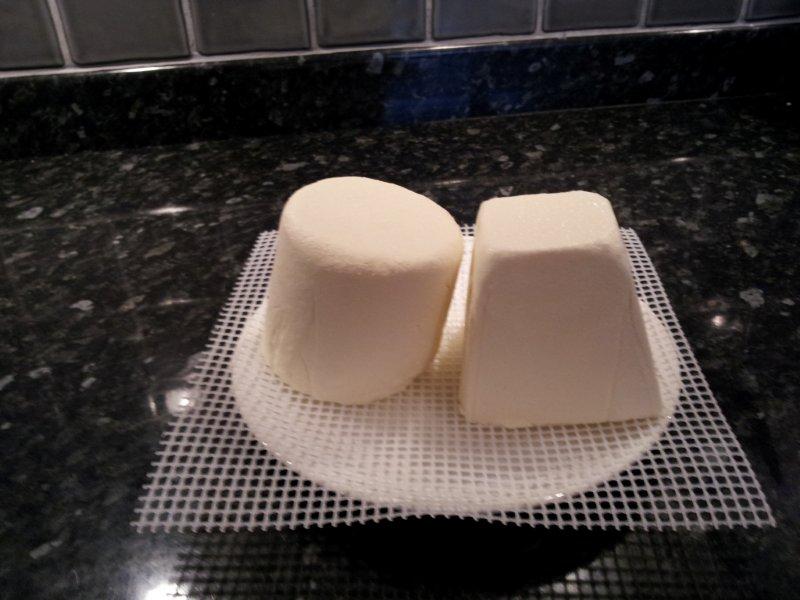 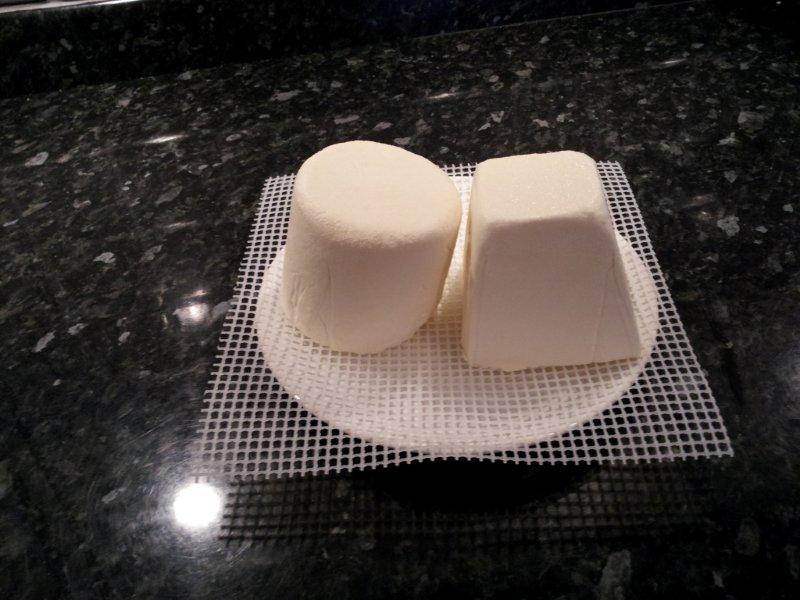 Mesophile is an organism that grows best in moderate temperature, neither too hot nor too cold, typically between 20 and 45°C (68 and 113 °F)

The habitats of these organisms include especially cheese, yogurt, and mesophile organisms are often included in the process of beer and wine making.

The starter culture has a crucial role to play during all phases of the cheese making and maturation process. As the culture grows in the milk, it converts lactose to lactic acid. This ensures the correct pH for coagulation in both the press and final cheese curd. It also secures the final moisture level and yield in the cheese. During ripening, the culture enzymes have to give a balanced aroma, taste, texture, surface appearance and if required, eye formation.

Rennet contains many enzymes, including protease that coagulates the milk, causing it to separate into solids (curds) and liquid (whey).  The active enzyme in rennet is called chymosin or rennin but there are also other important enzymes in it, e.g., pepsin and lipase.

Whey is the liquid remaining after milk has been curdled and strained. It is a by-product of the manufacture of cheese or casein and has several commercial uses. Sweet whey is manufactured during the making of rennet types of hard cheese like cheddar or Swiss cheese. Acid whey (also known as “sour whey”) is obtained during the making of acid types of cheese such as cottage cheese.

Permanent link to this article: https://animatedscience.co.uk/2012/1st-cheese

This is my lastest salami used on free range pork using beef intestines. It is made using the same method as before. However, this time I have put in in the fridge at 9C and 60-80% humidity with door shut. Then the temp and humdity has been very constant at the start.

Now at 17 days they still seem a little damp on outside so I removed the bowl of water to allow skins to start to dry off. I am asssuming that after 17 days we are starting to get cured! I think it has helped having temp more even and has stopped any case hardening.

At 22 days still wet in there so I have opened the door a crack.

So at 4 weeks old with fridge off and open a crack for 1 week in the process to let some moisture come out they seem to be getting there. I have tested a smaller one and it is fine but I am going to leave that one for a week longer. Also the really long ones over a foot long are still quite soft towards the centre so they will need longer. However, if I slice a bit and rehang they will be ok. Also the temp has been between 10-15C and RH 60-75% approx.

Now found a tiny bit of green mold growing a few days later so I have wiped over with vinegar and dried off and then hung for a couple of days inside. They have gone all shiny and a bit harder as some fat ozzed out and melted. Now in the fridge for a week till back of holiday. Then back out for 24 hours to dry off again as they got a bit damp again and vac pack.

Each Salami is about 170g so I have about 18 little ones. In some cases the longer ones got cut in half before packing. Now in the fridge and some in the freezer!

Hence each Salami…..  add a bit on for equipment and string etc..! 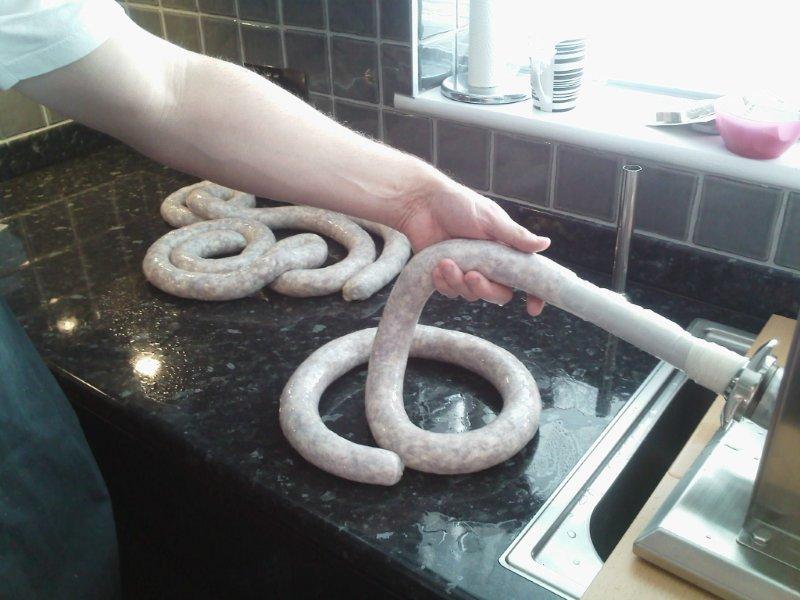 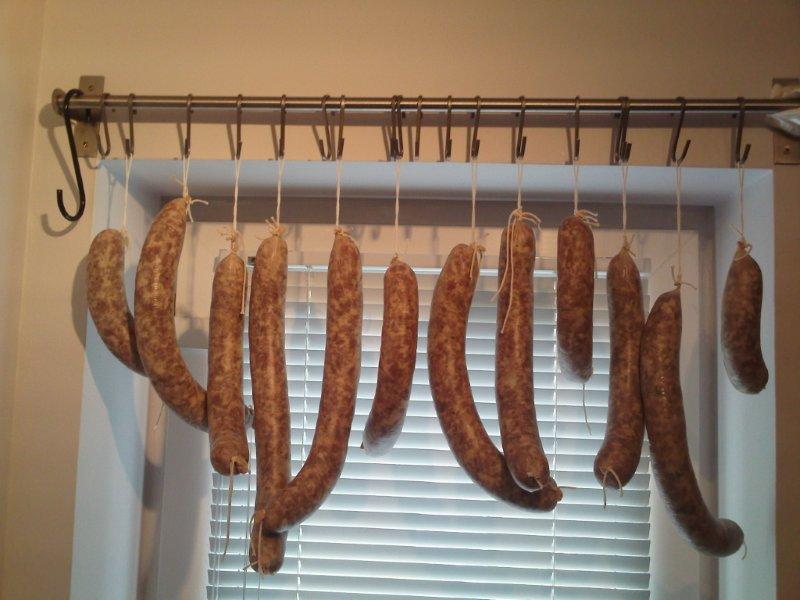 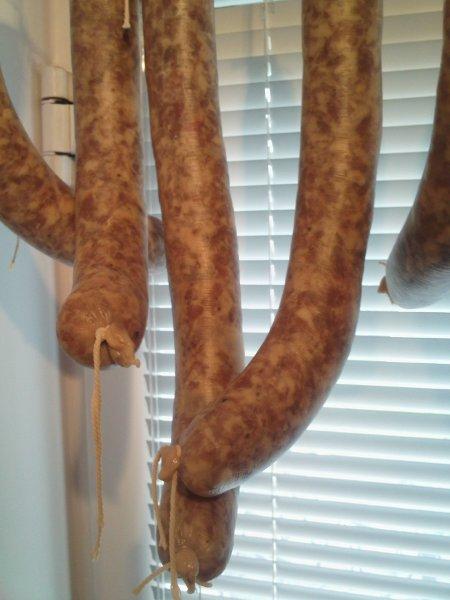 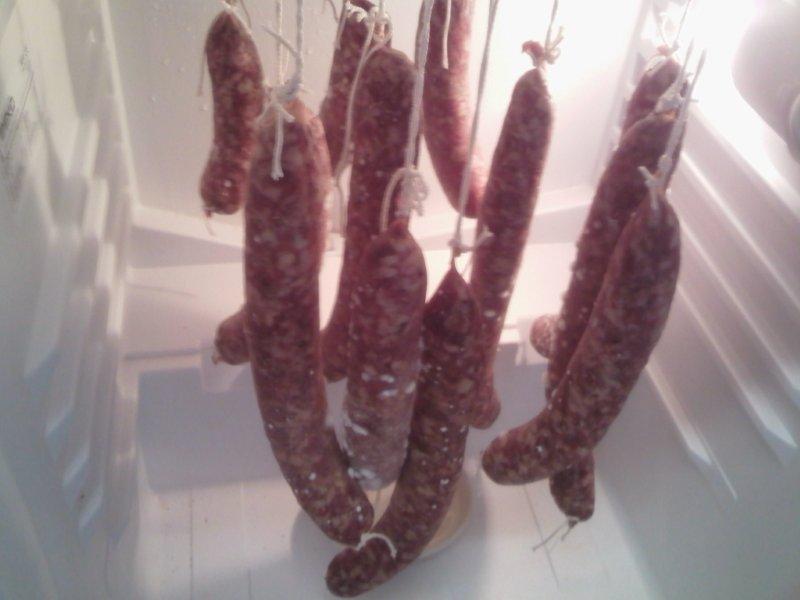 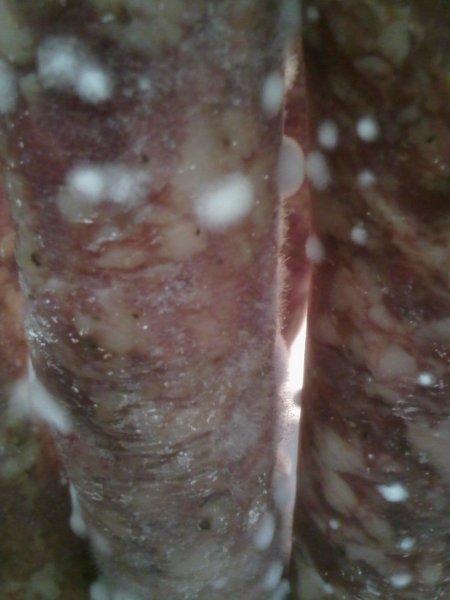 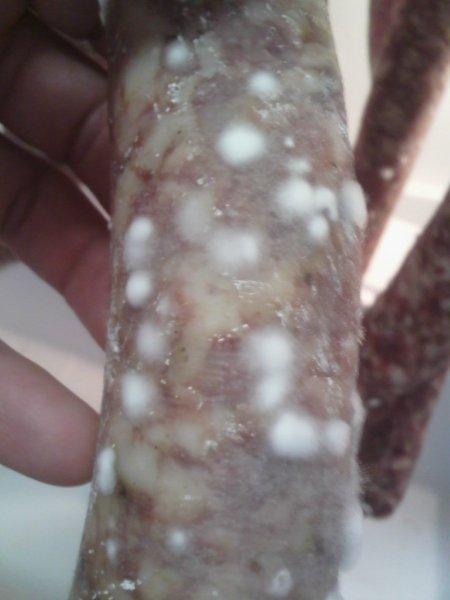 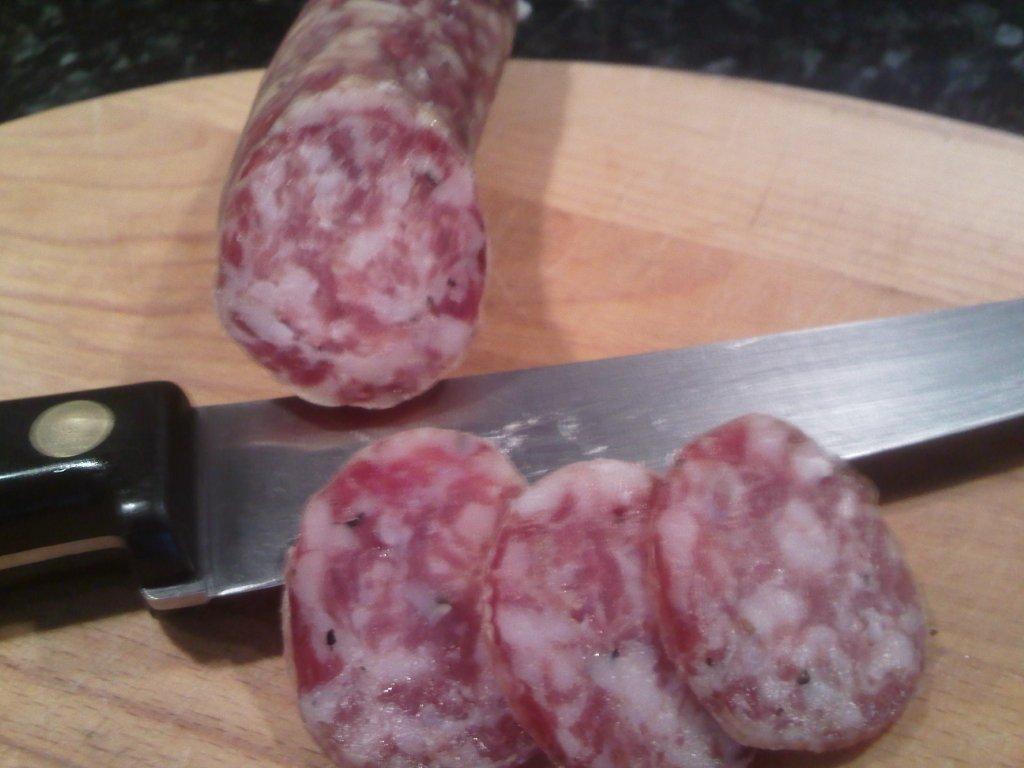 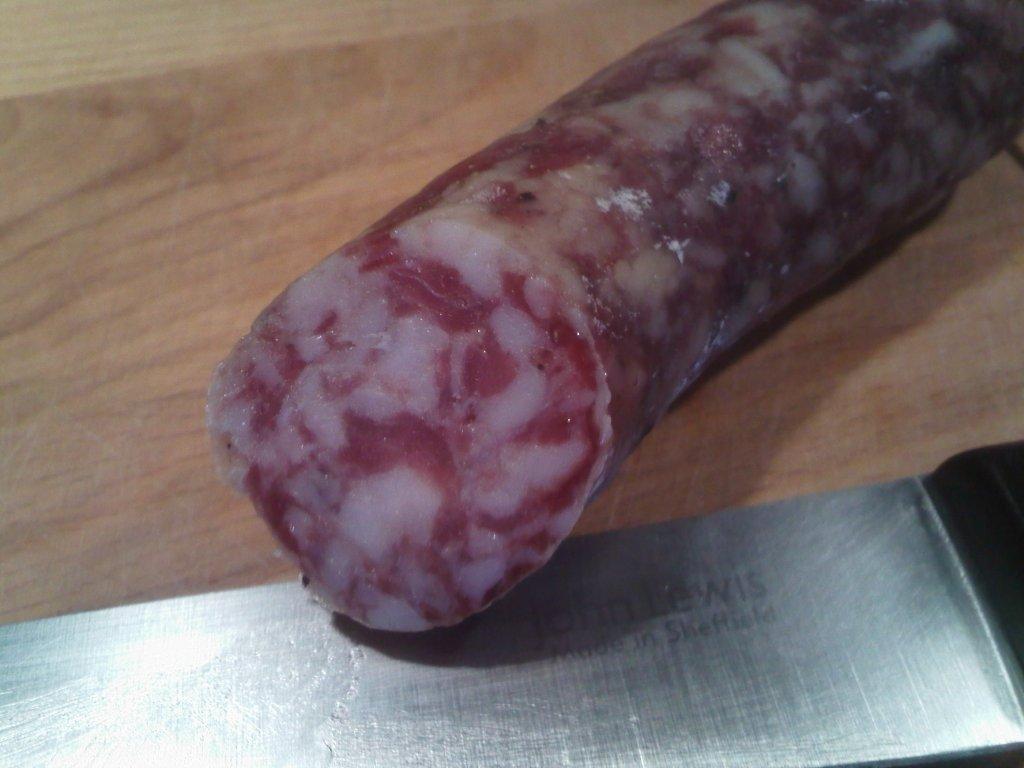 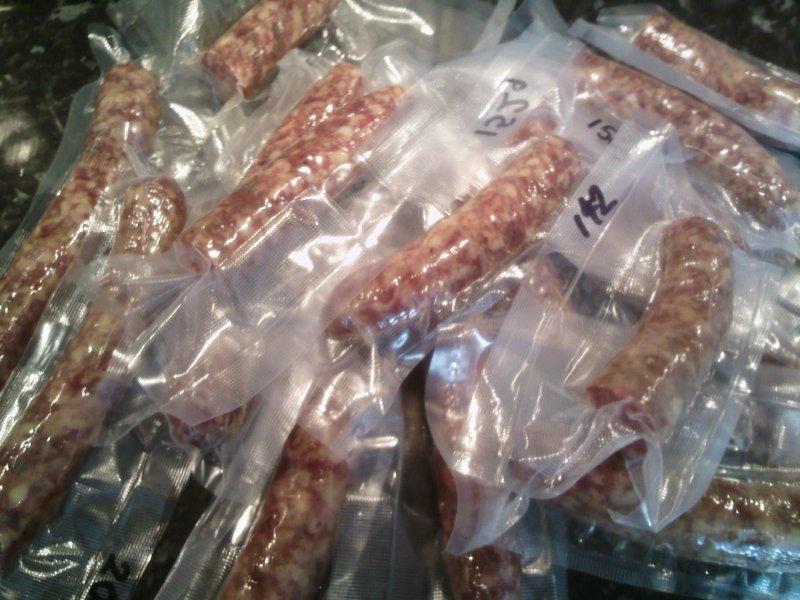 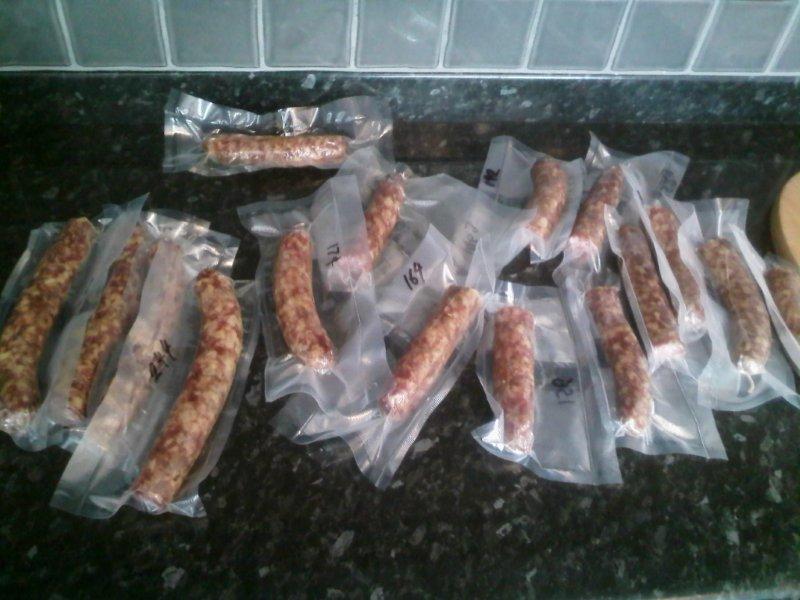 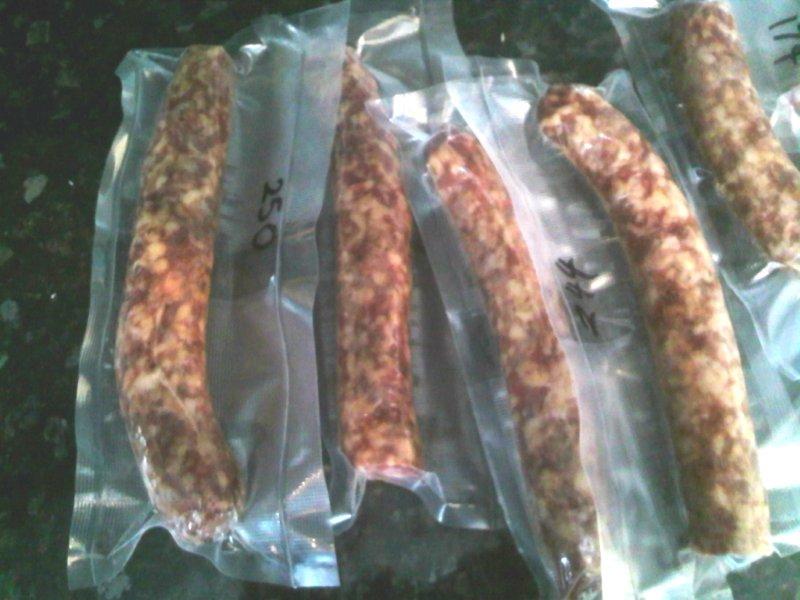 Permanent link to this article: https://animatedscience.co.uk/2011/italian-salami-beef-intestines

Should we ban Whaling and the capture of all mammals for sea parks?
Yes
474 Vote
No
129 Vote