An area for all GCSE biology related items

Permanent link to this article: https://animatedscience.co.uk/2013/concern-over-child-caffeine-intake

Why must childbirth be such hard labour?

Why must childbirth be such hard labour?

Find out how metabolic rate links to this idea?

Permanent link to this article: https://animatedscience.co.uk/2013/why-must-childbirth-be-such-hard-labour

Permanent link to this article: https://animatedscience.co.uk/2013/neuron-growth-cuts-memory-space 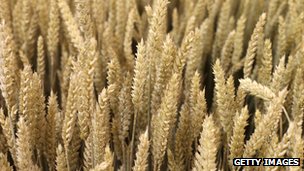 British scientists say they have developed a new type of wheat which could increase productivity by 30%.

The Cambridge-based National Institute of Agricultural Botany has combined an ancient ancestor of wheat with a modern variety to produce a new strain.

In early trials, the resulting crop seemed bigger and stronger than the current modern wheat varieties.

It will take at least five years of tests and regulatory approval before it is harvested by farmers.

Some farmers, however, are urging new initiatives between the food industry, scientists and government.

They believe the regulatory process needs to be speeded up to ensure that the global food security demands of the next few decades can be met, says the BBC’s Tom Heap.

One in five of all the calories consumed round the world come from wheat.

But despite steady improvement in the late 20th century, the last 15 years have seen little growth in the average wheat harvest from each acre in Britain.

Just last month, cereal maker Weetabix announced that it would have to scale back production of some of its products due to a poor wheat harvest in the UK.

Now British scientists think they may have found the answer to increasing productivity again.

Around 10,000 years ago wheat evolved from goat grass and other primitive grains.

The scientists used cross-pollination and seed embryo transfer technology to transfer some of the resilience of the ancient ancestor of wheat into modern British varieties.

The process required no genetic modification of the crops.

Permanent link to this article: https://animatedscience.co.uk/2013/uk-scientists-develop-superwheat