Why cheap meat costs the Earth

Why cheap meat costs the Earth

From breeding animals that feel no pain to cruelty in the slaughterhouse – our demand for meat poses huge moral dilemmas, says Alex Renton in this edited extract from his new book 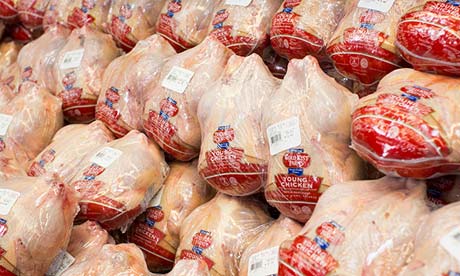 We consume 52 billion chickens each year in the rich world. Photograph: Kristoffer Tripplaar/Alamy

In the rich world, each of us consumes or uses 30 or more animals a year (the bulk – 52 of the 59 billion – are chickens). We don’t, in the nutritional sense, need these animals to feed us – certainly not in those numbers. Yet, in order to eat them at an acceptable price we have to imprison them, alter them genetically and chemically, and kill them. We have moved inexorably into ever greyer ethical territory. Any planning for a food future that still envisages using animal products and meat must debate the “moral cost”.

I am not sentimental. I have killed and butchered many kinds of animals, and have been on prearranged visits to slaughterhouses in Britain and abroad. I have seen the job done carefully and kindly. It would have been better if I had just dropped in to those abattoirs, but the business of meat production is secretive; if it were public, it would lose customers. In some places, the meat trade is less shy: I’ve seen puppies blow-torched in tiny cages to remove their hair before butchering – a normal village practice in Vietnam.

Many moral meat eaters think the horrors of the slaughterhouse are exaggerated. But impartial research by American scientist (and abattoir designer) Temple Grandin reveals extraordinary and unnecessary horrors. She reported “deliberate acts of cruelty occurring on a regular basis” at 32% of the slaughterhouses she visited in the US: 26% of the chicken-killing facilities had abuses that should have meant immediate closure; chickens scalded to remove their feathers, thrown in the trash and found later, still alive; a worker dismembering a fully conscious cow; cows, which are usually stunned then bled while their hearts are still pumping, “waking up on the bleed rail”.

“What went on when she wasn’t looking?” asked Jonathan Safran Foer, in his fascinating moral dissection Eating Animals. Cheap meat means corners cut on safety, health and welfare: humane treatment generally slows down a production line. Safran Foer quotes research that shows “demand for lean pig meat … has led the pork industry to breed pigs that suffer not only more leg and heart problems, but greater excitability, fear, anxiety and stress … We have focused the awesome power of modern genetic knowledge to bring into being animals that suffer more.”

But animals that feel more pain may not be the worst moral horror on the menu. Genetic modification by gene splicing offers the chance to make infinite changes – removing unwanted features or introducing characteristics from any living thing, be it mammal, fish, insect or flower. Already Chinese scientists are tampering with the genes of laboratory mice to see what they can get. In her book Frankenstein’s Cat, food science writer Emily Anthes describes what she saw at Fudan University in Shanghai: “Peek into the 45,000 mouse cages and you’ll see a collection of misfits. By randomly disabling the rodents’ genes, the scientists here are churning out hundreds of odd animals, assembly-line style. They have created mice studded with skin tumours and mice that grow tusks … One strain ages at warp speed. Another can’t feel pain.”

The worry for the moral meat eater is in losing the benchmarks by which we can judge animals’ treatment. How will welfare legislation, applied to specific vertebrate species, adapt as the species do – to, say, a pig with no pain reflex? Academic philosopher Adam Shriver said in 2009 that it may already be possible to “genetically engineer factory-farmed livestock with a reduced or completely eliminated capacity to suffer“. He cites research at Washington and Toronto universities, where the brains of mice have been altered so that, although they still feel pain, they don’t avoid it as untampered mice might. GM scientist Professor Helen Sang, of the Roslin Institute, told me such changes could be pursued using gene-editing techniques. She manipulates poultry genes, splicing together parts of DNA to achieve useful adaptations. What she does is no more than a different way of modifying genomes – something humans have been doing since they first domesticated animals 10,000 years ago. She explains this with patience and some wariness – the Daily Mail has described her workplace as “Frankenstein’s farmyard”.

Her most famous work, so far, has been in treatments for human illnesses, but her interests lie in more than disease resistance: in GM there are environmental benefits – as well as productivity and quality improvements – that will be advantageous to food security and society. Her view is that these benefits can’t be achieved by conventional breeding. “There’s nothing innately wrong in genetic modification, as long as … you characterise the effects of that carefully – and you don’t put in antibiotic-resistance genes, or anything like that. But, becausepeople are very suspicious of using these technologies, you can argue that we should concentrate on using them for things that can’t be achieved by selection.”

For Sang, there are ethical issues. She is not alone. Judging by the response to an op-ed by Shriver in the New York Times in 2011, people who care about animal rights believe we should stop factory farmingrather than modify animals not to suffer. Commentators such as agricultural economist Simon Fairlie say Shriver’s proposal is an attempt to make animals into the “automata” that the philosopher Descartes said they were three centuries ago. Fairlie doesn’t like Shriver’s “lunatic” notion, and neither do I. And, of course, the driver will not be better meat, but meat that is less trouble. Indeed, it should demand a whole new round of debate over meat eating: if society sanctions meat-machine animals with no feelings and no rights, the only feasible way to oppose it would be to be against all meat eating.

This is an edited extract from Planet Carnivore: Why cheap meat costs the Earth (and how to pay the bill), published by Guardian Shorts(ebook, £1.99).

Permanent link to this article: https://animatedscience.co.uk/2013/why-cheap-meat-costs-the-earth

Should we ban Whaling and the capture of all mammals for sea parks?
Yes
526 Vote
No
137 Vote