Does chocolate give you spots?

Producing vaccines against viral threats is a potentially hazardous business and that’s why manufacturers have to operate strict controls to ensure that no pathogens escape.

British scientists have developed a new method to create an entirely synthetic vaccine which doesn’t rely on using live infectious virus, meaning it is much safer.

What’s more the prototype vaccine they have created, for the animal disease foot-and-mouth, has been engineered to make it more stable.

That means it can be kept out of the fridge for many hours before returning to the cold chain – overcoming one of the major hurdles in administering vaccines in the developing world.

The research, published in the journal PLOS pathogens, was a collaboration between scientists at Oxford and Reading Universities, the Pirbright Institute, and the UK’s national synchrotron facility, the Diamond Light Source near Oxford.

Diamond is a particle accelerator which sends electrons round a giant magnetic ring at near light speeds.

The electrons emit energy in the form of intense X-rays which are channelled along “beamlines” – into laboratories where they are used to analyse structures in extraordinary detail.

Synchrotrons have been used before to analyse viruses at the atomic level, but the technology has advanced considerably to enable scientists to create a stable synthetic vaccine.

“What we have achieved here is close to the holy grail of foot-and-mouth vaccines.

Unlike traditional vaccines, there is no chance that the empty shell vaccine could revert to an infectious form,” said Dave Stuart, Life Sciences Director at Diamond, and MRC Professor of Structural Biology at the University of Oxford.

“This work will have a broad and enduring impact on vaccine development, and the technology should be transferable to other viruses from the same family, such as poliovirus and hand-foot-and-mouth disease, a human virus which is currently endemic in South-East Asia.”

These human disease threats, like foot-and-mouth, are all picornaviruses.

Viruses are inherently unstable and fragile, but picornaviruses can be studied using X-ray crystallography. 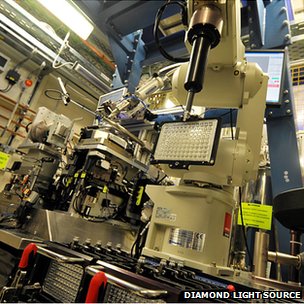 This enables the protein shell of the virus to be analysed at the atomic level – something a billion times smaller than a pinhead.

As with any vaccine, the aim is to prompt the immune system to recognise this outer shell and destroy the pathogen before it has time to lock onto cells and infect them with its genetic material.

In this research the scientists created a synthetic viral shell, but lacking its pathogenic RNA interior – the genetic material the virus uses to replicate itself.

Crucially they were able to reinforce the structure of the viral shell to make it stronger, to improve the stability of the vaccine.

Pre-clinical trials have shown it to be stable at temperatures up to 56C for at least two hours. Foot-and-mouth is endemic in central Africa, parts of the Middle East and Asia, so this would be a significant improvement over existing vaccines.

With current foot-and-mouth vaccines it is difficult to distinguish between immunised livestock and those which have been infected.

That proved to be a major hurdle in controlling the foot-and-mouth outbreak in the UK in 2001 because it would have prevented the export of livestock.

But the synthetic vaccine should allow scientists to show the absence of infection in vaccinated animals.

“The foot-and-mouth-disease virus epidemic in the UK in 2001 was disastrous and cost the economy billions of pounds in control measures and compensation,” explained Dr Bryan Charleston, Head of Livestock Viral Diseases Programme at the Pirbright Institute.

“This important work has been a direct result of the additional funding that was provided as a result of the 2001 outbreak to research this highly contagious disease.”

The potential hazards of working with viruses was underlined in 2007 when the Pirbright laboratory site was identified as the source of a leak which led to an outbreak of foot-and-mouth disease.

Polio, another picornavirus, which exclusively affects humans, has been eliminated from nearly every country in the world, although it stubbornly persists in Nigeria, Pakistan and Afghanistan.

The need for secure vaccine production will become even more vital should polio be wiped out.

“Current polio vaccines, which use live virus for their production, pose a potential threat to the long-term success of eradication if they were to re-establish themselves in the population.

“Non-infectious vaccines would clearly provide a safeguard against this risk”, said Dr Andrew Macadam, a virologist specialising in polio at the National Institute for Biological Standards and Control in Hertfordshire.

“This technology has great potential in terms of cost and biosafety.

“Any design strategy that minimises the chances of accidental virus release would not only make the world a safer place but would lower the bio-containment barriers to production allowing vaccines to be made more cheaply all over the world.”

Permanent link to this article: https://animatedscience.co.uk/2013/synchrotron-yields-safer-vaccine