Plastic banknotes: Bank of England plans to modernise from paper

Plastic banknotes: Bank of England plans to modernise from paper

http://gu.com/p/3tjmf  well done to the Chemists….

Public consultations to begin on smaller, tougher notes, due for release starting in 2016 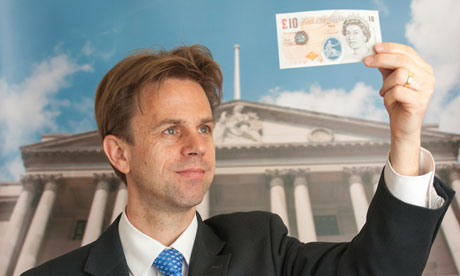 Bank of England displays the ‘tougher, neater, smaller’ banknote due for release in 2016. Photograph: David Oliver

Plastic banknotes with a see-through image of Britannia are likely to replace traditional paper notes from 2016 under plans being drawn up by the Bank of England.

The Bank said the wipe-clean polymer notes will be less tatty, tougher to counterfeit and last up to six times longer than cotton-paper based notes. They will also be 15% smaller, bringing English notes into line with sizes in other countries, but will remain larger than existing euro notes.

The public will have the chance to look at and feel the new notes at shopping centres across the country in a consultation process that starts immediately, with the new governor of the Bank of England, Mark Carney, taking a final decision on the go-ahead in December. The Sir Winston Churchill £5 note will be the first to be made in polymer and launched in 2016, with the Jane Austen £10 note following in 2017. All the notes will continue to feature the Queen and use existing colours.

Plastic notes have been in circulation in Australia for more than two decades and are being rolled out in Canada, Carney’s home country, but the Bank said its polymer project began long before the new governor was appointed.

Scotland and Northern Ireland, where seven banks have the right to issue notes, will be free to continue with paper notes, opening up the possibility that cash machines in Carlisle will issue in plastic but across the border in Gretna will continue to supply in paper.

The Bank of England said that in tests, the new plastic notes do not melt until at least 120C and survive washing machines much better than existing paper notes. Despite being made from polymer pellets, the Bank said the notes will be more environmentally friendly as the manufacturing process does not use the same intensity of water as cotton-paper manufacture.

The new notes will cost around 50% more to produce, but the Bank estimates it will save £100m as it will need to replace the notes far less frequently. But the Bank ruled out importing plastic money from China. The notes will continue to be produced at the Bank’s ultra-secure plant in Debden, Essex, although subcontracted to a private company, likely to be either De La Rue, the existing maker, or Innovia, which manufactures most of the polymer notes currently in circulation across the world.

The deputy governor of the Bank of England, Charles Bean, said there was no question that the introduction of plastic notes was a “done deal” and promised to listen to feedback from the public before going ahead. “Polymer banknotes are cleaner, more secure and more durable than paper notes. They are also cheaper and more environmentally friendly.

“However, the Bank of England would print notes on polymer only if we were persuaded that the public would continue to have confidence in, and be comfortable with, our notes. The results of the consultation programme on which we are embarking will therefore form a vital part of our assessment of the merits of polymer banknotes.”

In recognition of the need for groups such as the blind to handle the change, the Bank will continue to issue notes in size-ascending order, so the new fivers and tenners will continue to be slightly different in size. There is no switchover date yet proposed for when or if £20 notes – the most common note in circulation – will be changed to polymer.

In Canada, where high-value notes are already made of polymer and lower-denomination notes will be introduced later this year, there have been some complaints that the notes tend to stick to each other. But the Bank of England said it did not expect this to be an issue, although it did accept that brand new notes will have a more slippery texture than cotton-paper ones.

The extended time scale for the introduction of the notes has been put in place to allow the cash handling industry, retailers and ATM and vending machine operators time to mange the transition. ATMs will be able to hold, say paper £20 notes and plastic £10 notes, but will not able to issue plastic £10 notes alongside paper £10 notes as they will be different sizes. But because the polymer notes will be thinner, cash machines will be able to stock more, and operators say the machines will be less likely to jam.

But it is security and counterfeiting that the Bank of England places at the heart of the new notes. Evidence from Australia and other countries such as New Zealand, Singapore, Mexico and Nigeria, where polymer notes are common, is that after their introduction counterfeiting reduced substantially. Last year the Bank of England removed 719,000 counterfeit notes from circulation, a relatively high rate compared with other countries.

Shoppers in Northern Ireland will already be familiar with polymer notes, since a limited-edition note was circulated in 2000 by Northern Bank to mark the millennium.

If the new notes go ahead, removal of paper notes is expected to be relatively swift, taking no more than eight months.

Permanent link to this article: https://animatedscience.co.uk/2013/plastic-banknotes-bank-of-england-plans-to-modernise-from-paper