Ofsted methods may not be valid, says senior academic

Interesting that when asked to go all “Scientific” and actually provide evidence that their methods are correct this branch of the Government refuses to provide it. It shows how much we need proper Scientific research to be used in schools to get the best out of the resources available. Time to stop treating children as guinea pigs and use evidence based teaching methods and evidence based evaluation.

Ofsted methods may not be valid, says senior academic 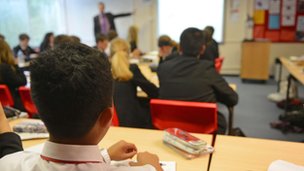 Schools inspectors in England are basing their verdicts on evaluation methods which may not be reliable, a senior academic has claimed.

Prof Robert Coe, whose work has been cited by ministers, said there was no proof that Ofsted’s lesson observations led to valid judgments.

Prof Coe said inspectors relied on lesson observation despite no evidence that it led to better learning.

“I don’t know of any head teacher who doesn’t believe that classroom observation isn’t anything other than a help,” said Sir Michael in an interview with the Times Educational Supplement.

He drew on figures released on Monday by Ofsted showing a nine percentage point rise in the proportion of schools judged good or outstanding and said this proved the watchdog’s tougher inspection regime had “galvanised the system”.

“The fact that we are an inspectorate and we do make judgments has made a huge amount of difference.”

Prof Coe, director of Durham University’s Centre for Evaluation and Monitoring, told a major educational research conference that Ofsted needed to demonstrate its lesson observations were valid and backed by research evidence.

He added that millions were being spent on the watchdog in the hope of raising educational standards but questioned whether inspections benefited the system.

He said some studies in fact suggested that schools take a long time to recover from inspections and they don’t do any good.

He told BBC News: “If you sit in a classroom, everyone thinks they can judge how good the lesson is – but can you really?

“Quite a lot of research says that you can’t.”

He added that schools increasingly use classroom evaluation to monitor lesson quality internally.

“Teachers do it every week – but is it reliable?

“Teachers are trying to do what Ofsted wants – but does it really make things better?

“If Ofsted says a lesson is no good – that’s a big deal.”

In his talk, Prof Coe suggested that ratings given to lessons by observers could be “influenced by spurious confounds”.

These included the charisma and confidence of the teacher, the subject matter being taught, students’ behaviour in the classroom and the time of day.

He questioned whether the observation ratings could be consistent given so many variables.

He also listed a series of “poor proxies for learning”, arguing that outward signs such as busy and motivated students and a calm and ordered classroom do not necessarily always mean that students are learning effectively and could reproduce correct answers independently.

Other speakers at the ResearchED conference highlighted a lack of evaluation for other government interventions in education such as the academies programme and the Teach First teacher training programme.

A Department for Education spokeswoman said: “Our major reforms – which are improving the lives of children and young people – are underpinned by a substantial programme of research and evaluation.

“In addition we are rising to the challenge set out by Dr Ben Goldacre in the Analytical Review by working with the teaching profession to meet his vision on how the sector can become more evidence-based.

“We have also provided £125m to the Education Endowment Foundation to improve evidence on how to increase attainment for disadvantaged children.”

Permanent link to this article: https://animatedscience.co.uk/2013/ofsted-methods-may-not-be-reliable