Picking a laptop for University? 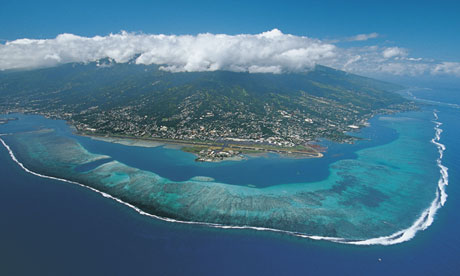 Tahiti, above, was exposed to 500 times the accepted maximum radiation level from nuclear tests in the 20th century, reports Le Parisien. French nuclear tests in the South Pacific in the 1960s and 1970s were far more toxic than has been previously acknowledged and hit a vast swath of Polynesia with radioactive fallout, according to newly declassified ministry of defence documents which have angered veterans and civilians’ groups.

The papers, seen by the French paper Le Parisien, reportedly reveal that plutonium fallout hit the whole of French Polynesia, a much broader area than France had previously admitted. Tahiti, above, the most populated island, was exposed to 500 times the maximum accepted levels of radiation. The impact spread as far as the tourist island, Bora Bora.

Thousands of veterans, families and civilians still fighting for compensation over health issues have insisted France now reveals the full truth about the notorious tests whose impact was kept secret for decades.

From 1960 to 1996, France carried out 210 nuclear tests, 17 in the Algerian Sahara and 193 in French Polynesia in the South Pacific, symbolised by the images of a mushroom cloud over the Mururoa atoll. For decades, France argued that the controlled explosions were clean.Jacques Chirac, the French president, controversially resumed nuclear atoll explosions in the South Pacific shortly after being elected in 1995.

Le Parisien said the documents “lifted the lid on one of the biggest secrets of the French army”. It said papers showed that on 17 July 1974, a test exposed Tahiti to 500 times the maximum allowed level of plutonium fallout.

Bruno Barillot, who has investigated the impacts of the nuclear tests for the Polynesian government, complained of the high levels of thyroid cancers and leukaemia in Polynesia. He said the declassified documents revealed Tahiti had “literally been showered with plutonium for two days” during the Mururoa test; from the outset France knew the impact spread further than it publicly admitted. But of the 2,050 pages declassified, 114 remained blacked out.

Richard Oldham, a member of the Polynesia nuclear workers’ association Mururoa e Tatou, told Radio New Zealand International : “It’s the right for our future generations to know what has happened in this country.”

In 2006 a French medical research body found nuclear testing had caused an increase in cancer on the nearest inhabited islands. The French judiciary began investigating health implications. It was not until 2010 that France acknowledged that there could be a compensation process for veterans and civilians. But that is complex and limited to a small geographical area and certain ailments.

About 150,000 veterans and civilians worked on, or were present during, nuclear tests, including 127,000 in Polynesia. But of 800 dossiers, only 11 people have received compensation.

Troops who worked on the tests have described a staggering lack of precaution for workers. During the Mururoa tests in French Polynesia in the late 1960s, one veteran described how he was stationed in shorts and a T-shirt on a boat only about 15 miles from the explosion before having to sail immediately to the area of the vast mushroom cloud to examine the damage.

Others on different tests wore shorts and had no sunglasses; they were told simply to shield their eyes and turn their backs at the time of the explosion.

Permanent link to this article: https://animatedscience.co.uk/2013/french-nuclear-tests-showered-vast-area-of-polynesia-with-radioactivity