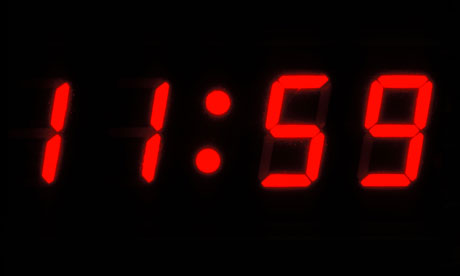 The world is about to get a well-earned long weekend but don’t make big plans because it will only last an extra second. A so-called “leap second” will be added to the world’s atomic clocks as they undergo a rare adjustment to keep them in step with the slowing rotation of the Earth.

To achieve the adjustment, on Saturday night atomic clocks will read 23 hours, 59 minutes and 60 seconds before moving on to midnight Greenwich Mean Time.

Super-accurate atomic clocks are the ultimate reference point by which the world sets its wristwatches. But their precise regularity – which is much more constant than the shifting movement of the Earth around the sun that marks out our days and nights – brings problems of its own.

If no adjustments were made, the clocks would move further ahead and after many years the sun would set at midday. Leap seconds perform a similar function to the extra day in each leap year which keeps the calendar in sync with the seasons. The International Earth Rotation and Reference Systems Service (IERS) based in Paris, is responsible for keeping track of the gap between atomic and planetary time and issuing international edicts on the addition of leap seconds.

“We want to have both times close together and it’s not possible to adjust the Earth’s rotation,” Daniel Gambis, head of the Earth Orientation Centre of the IERS, told Reuters.

Gambis said the turning of the Earth and its movement around the sun were far from constant.

In recent years, a leap second has been added every few years, slightly more infrequent than in the 1970s, despite the long-term slowdown in the Earth’s rotation caused by tides, earthquakes and a host of other natural phenomena.

Adjustments to atomic clocks are more than a technical curiosity.

There have been calls to abandon leap seconds but a meeting of the International Telecommunications Union (ITU), the UN agency responsible for international communications standards, failed to reach a consensus in January.

“They decided not to decide anything,” said Gambis, adding that another attempt would be made in 2015.

Opponents of the leap second want a simpler system that avoids the costs and margin for error in making manual changes to thousands of computer networks. Supporters argue it needs to stay to preserve the precision of systems in areas such as navigation.

Britain’s Royal Astronomical Society (RAS) says the leap second should be retained until there is a much broader debate on the change.

“This is something that affects not just the telecom industry,” said RAS spokesman Robert Massey. “It would decouple timekeeping from the position of the sun in the sky and so a broad debate is needed.”

Time standards are important in professional astronomy for pointing telescopes in the right direction but critical systems in other areas, not least defence, would also be affected by the change. “To argue that it would be pain-free is not quite true,” Massey said.

In the meantime, Massey plans to use his extra second wisely this weekend. “I’ll enjoy it with an extra second in bed,” he said.

Permanent link to this article: https://animatedscience.co.uk/2012/leap-second-lengthens-weekend