Dark matter tracks could give earliest view of Universe

Researchers have come up with a way to glimpse the infant Universe by decoding the earliest ripples in its light.

They say this can be achieved by capturing the specific radio wavelength of 21cm from the heavens.

The trick is to tell the difference between 21cm waves from our galaxy and those from distant, ancient sources.

The fact that “dark matter” moved faster than normal matter in the early Universe should help amplify the distant signal, they report in Nature.

That could yield a look at the Universe when it was just 1% of its current age.

The scientists first revealed their 3-D computer simulations on Monday at the Gamma Ray Bursts in the Era of Rapid Follow-up conference, hosted by Liverpool John Moores University.

The current record-holder for the oldest object ever spotted is a galaxy named UDFy-38135539, seen in an optical image captured by the Hubble telescope. Its light escaped more than 13 billion years ago, when the Universe was already a youth of less than 700 million years. 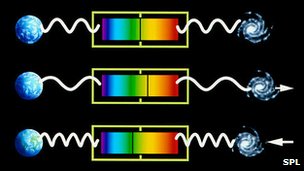 Scientists measure these literally astronomical distances with the “redshift” of a given light source; it is a measure of how much the source’s light is stretched as it races away from us in the ever-expanding Universe.

However, if it works, the view will be a statistical one – astronomers will not actually see individual stars and galaxies, but rather be able to estimate how many objects of what sizes were around in those early days.

But instead of seeing only the largest and brightest objects, as studies with telescopes such as Hubble typically do, it should work down to galactic haloes as small as a millionth the mass of the Milky Way’s halo.

“It’s very small galaxies from very far away; it’s completely hopeless to see them individually with any telescope in the next few decades,” said Rennan Barkana of Tel Aviv University, a co-author on the study.

“That’s why this is so interesting – it’s an indirect detection of the whole population of these galaxies, but it would be a very clear confirmation that these galaxies are there,” Prof Barkana told BBC News.

The 21cm wavelength arises from changes within the atoms of hydrogen, the Universe’s most abundant element, and one that can tell us much about the early Universe before heavier elements were formed.

A key insight lies in the different speed limits for dark matter and normal matter in the early Universe, first pointed out in a 2010 Physical Review D paper.

The early Universe was shaped in part by pressure waves – just like sound waves – created in the wake of the Big Bang. Like air molecules shifted around by sounds, these waves carried and distributed normal matter in regular patterns we can now observe. 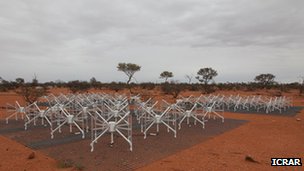 But dark matter, because it does not interact with normal matter, was not swayed by the waves, responding only to gravity.

The distributions of dark and normal matter in the early Universe changes just where the matter – mostly hydrogen – ended up, in turn changing where the 21cm emission should come from, and how intense it should be.

Averaged over the sky, there should be a greater variation in this signal than we see locally, and the new paper makes the case that heating by X-ray radiation in those early days should make this statistical fluctuation even easier to spot.

Prof Barkana said that although there are no current radio telescope arrays designed to catch these 21cm waves, several are under construction that could be put onto the task.

“This whole subject of 21cm cosmology is about to open up; there are at least four different groups building radio telescope arrays focussing on about redshift 10,” he said.

“But until now no one has had the incentive to build an array optimised for this (redshift 20) wavelength range.”

Permanent link to this article: https://animatedscience.co.uk/2012/dark-matter-tracks-could-give-earliest-view-of-universe