This is a great article which shows the process of having a theory and then trying to prove it, even if the experiement is huge!

Supersymmetry fails to predict the existence of mysterious super particles. 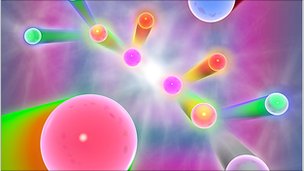 Results from the Large Hadron Collider (LHC) have all but killed the simplest version of an enticing theory of sub-atomic physics. Researchers failed to find evidence of so-called “supersymmetric” particles, which many physicists had hoped would plug holes in the current theory. Theorists working in the field have told BBC News that they may have to come up with a completely new idea. Data were presented at the Lepton Photon science meeting in Mumbai.

They come from the LHC Beauty (LHCb) experiment, one of the four main detectors situated around the collider ring at the European Organisation for Nuclear Research (Cern) on the Swiss-French border.

According to Dr Tara Shears of Liverpool University, a spokesman for the LHCb experiment: “It does rather put supersymmetry on the spot”.

The experiment looked at the decay of particles called “B-mesons” in hitherto unprecedented detail. If supersymmetric particles exist, B-mesons ought to decay far more often than if they do not exist. There also ought to be a greater difference in the way matter and antimatter versions of these particles decay.

The results had been eagerly awaited following hints from earlier results, most notably from the Tevatron particle accelerator in the US, that the decay of B-mesons was influenced by supersymmetric particles. LHCb’s more detailed analysis however has failed to find this effect. 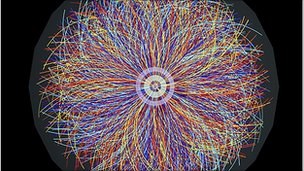 This failure to find indirect evidence of supersymmetry, coupled with the fact that two of the collider’s other main experiments have not yet detected supersymmetic particles, means that the simplest version of the theory has in effect bitten the dust. Collisions inside the LHC should have found some evidence of Supersymmetry by now. The theory of supersymmetry in its simplest form is that as well as the subatomic particles we know about, there are “super-particles” that are similar, but have slightly different characteristics. The theory, which was developed 20 years ago, can help to explain why there is more material in the Universe than we can detect – so-called “dark matter”. According to Professor Jordan Nash of Imperial College London, who is working on one of the LHC’s experiments, researchers could have seen some evidence of supersymmetry by now. “The fact that we haven’t seen any evidence of it tells us that either our understanding of it is incomplete, or it’s a little different to what we thought – or maybe it doesn’t exist at all,” he said. Disappointed the timing of the announcement could not be worse for advocates of supersymmetry, who begin their annual international meeting at Fermilab, near Chicago, this weekend.

Dr Joseph Lykken of Fermilab, who is among the conference organisers, says he and others working in the field are “disappointed” by the results – or rather, the lack of them. “There’s a certain amount of worry that’s creeping into our discussions,” he told BBC News. The worry is that the basic idea of supersymmetry might be wrong.

“It’s a beautiful idea. It explains dark matter, it explains the Higgs boson, it explains some aspects of cosmology; but that doesn’t mean it’s right. “It could be that this whole framework has some fundamental flaws and we have to start over again and figure out a new direction,” he said. Experimental physicists working at the LHC, such as Professor Nash, say the results are forcing their theoretical colleagues to think again. “For the last 20 years or so, theorists have been a step ahead in that they’ve had ideas and said ‘now you need to go and look for it’. “Now we’ve done that, and they need to go scratch their heads,” he said.

That is not to say that it is all over for supersymmetry. There are many other, albeit more complex, versions of the theory that have not been ruled out by the LHC results. These more complex versions suggest that super-particles might be harder to find and could take years to detect. Some old ideas that emerged around the same time as supersymmetry are being resurrected now there is a prospect that supersymmetry may be on the wane. One has the whimsical name of “Technicolor”. According to Dr Lykken, some younger theoretical physicists are beginning to develop completely novel ideas because they believe supersymmetry to be “old hat” . “Young theorists especially would love to see supersymmetry go down the drain, because it means that the real thing is something they could invent – not something that was invented by the older generation,” he said.

And the new generation has the backing of an old hand – Professor George Smoot, Nobel prizewinner for his work on the cosmic microwave background and one of the world’s most respected physicists. “Supersymmetry is an extremely beautiful model,” he said. “It’s got symmetry, it’s super and it’s been taught in Europe for decades as the correct model because it is so beautiful; but there’s no experimental data to say that it is correct.”

Permanent link to this article: https://animatedscience.co.uk/2011/lhc-results-put-supersymmetry-theory-on-the-spot

Should we ban Whaling and the capture of all mammals for sea parks?
Yes
475 Vote
No
130 Vote